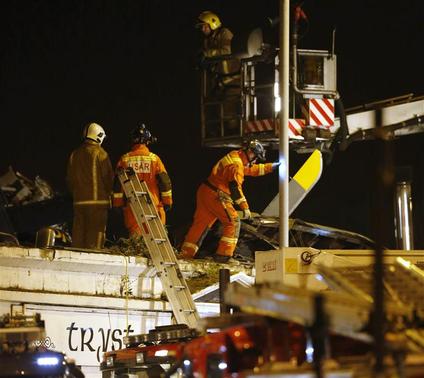 LONDON (Reuters) – A police helicopter crashed into a pub in Glasgow on Friday night, causing multiple injuries as dust and debris was thrown across↲ the busy drinking hole during a concert, eye witnesses said.

Scotland ‘s first minister, Alex Salmond, said people should prepare for the likelihood of fatalities. Three people were on board the helicopter, police said.

The helicopter spiraled into the Clutha pub on the banks of the River Clyde, collapsing↲ part of the roof but the aircraft did not appear to have caught fire, witnesses said.

“It was fairly busy, we were all having a nice time and then there was like a whoosh↲ noise,” Grace MacLean, who was in the pub at the time of impact, told the BBC.

“There was no bang, no explosion and then there was what seemed like smoke and we were all joking that the band had made the roof come down↲ and then it started to come down more and someone started screaming and the whole pub filled with dust and you couldn’t see anything, you couldn’t breathe.”

Police said two officers and one civilian pilot were on board the 12-metre (40 ft) Eurocopter EC135 T2.

Footage from the scene showed the mangled helicopter embedded in the roof of the pub surrounded by dozens of emergency vehicles.

A member of Parliament from the opposition Labour party described a “horrible scene” immediately after the crash though he praised• bystanders who formed human chains to rescue• revelers↲.

“It’s a horrible, horrible scene, but well done to the folk who were here. Everyone formed a chain of people from inside the pub to outside, and the fire brigade and everyone were here very quickly,” said the MP, Jim Murphy.

“Given an incident of this scale we must all prepare ourselves for the likelihood↲ of fatalities,” said Salmond.

British Prime Minister David Cameron said his thoughts were with those affected by the crash.

All My Portuguese Feeds